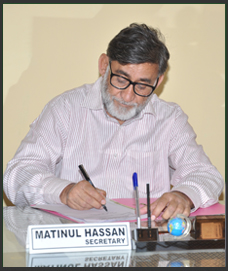 The Founder of Munam Public School, Mr. Matinul Hassan has established this institution under the aegis of Hazrat Munam Pak Talimee Mission with an objective of educating the educationally and economically left out section of the society. The institution has become a role model in the field of education with its continuous efforts to promote the vision among the educationally and economically weaker section of state of Jharkhand. His journey towards attainment of the above said vision started in the early eighties; he himself felt the pain of not receiving quality education because of non-availability of good school in Barhi sub division. It won't be wrong to say that more or less same educational plight was faced by almost all the households of Barhi sub-division in the early eighties. Looking at the economical and educational condition and despite of having all the resources in Hazaribagh town, he decided to set up an educational Institution in the remote area of Barhi sub-division at Maharajgunj – his place of birth. The local population of Hazaribag has not taken it as a merely institution but termed it as a revolution towards rural education. This has not only motivated him to achieve his goal so far but also given him the strength to establish first ever Muslim minority CBSE affiliated school of Jharkhand state. For the attainment of this noble cause, he formed a strong team of his childhood friends Mr. Shamshul Arfin, Mr. Shabhuddin, Mr. Habibul Hassan and Mr. Younus Raza. They have joined hands together and carried forward the task of educating the poor masses. Furthermore Islamic Development Bank, Jeddah had extended their financial assistance for the basic infrastructure. Islamic Development Bank had helped and turned the dream of education into realty of poor Muslims and educationally backward masses of Jharkhand.

As he always recites this couplet - "Main Akela Hi Chala tha Janeeb-e-manzil Magar, Log Attey Gayen Aur Karwan Banta Gaya." May this Caravan reach its destination and enlighten the lives of under-privileged for years and years to come. Ameen!